One of the new houses for leprosy sufferers and their families

This is where it all started. Stuart Martin, Pat and Jim O’Brien and Chris Swinburn, four of the six TASC trustees, visited the leprosy village on a LEPRA bike ride in 2001. They were so horrified at what they saw that they resolved to do something about it. To replace the rotting filthy huts in which the lepers lived they built substantial concrete homes, but they had to be built behind a high wall – no one in Madagascar could countenance anything else. Supporting these families has been a real challenge; the village is some distance away from Tanjomoha and Pere Emeric cannot visit as often as he would wish particularly since the roads are now in ruins again. But we have persevered and visit each year, checking on maintenance and throwing a big party for the villagers. Whilst part of our concern is the houses we built, a greater challenge is restoring dignity to those with leprosy and providing opportunities for their children and grandchildren who do not have the disease but who are still stigmatised in the local community and find it very difficult to work in the town.

The village looked good, but it was a great shock to discover that one of the oldest inhabitants and a great friend whom we have known for many years, had died. Annie was a remarkable lady; crippled and deformed by leprosy, her smile was irrepressible; she welcomed us each year to her home and she was the life and soul of the big party. She said once, “You treat me like I am somebody”. Not many people did.

On departing the village, saddened by the news, we encountered a young lady and her son sitting in the van. Dorette is 23 and her son Princecasha (Prince) 6 months; sadly he had a deformed foot. She was from a leprosy family, but not affected herself. Prince’s father had abandoned the mother when he found out she was pregnant and she had little or no hope of making a life for her family. We have provided her with a sewing machine, clothes, funding for food for a year and physio for her son’s foot; she will have to live behind the wall, but she can now start a small needlecraft business and will be better placed to move into wider society in a while. We will watch with care, and if and when the time is right we will buy her a house to live in with her young son.

The annual TASC Bike Ride and Supporters trip visited Farafangana and was delighted to see how much progress had been made in integrating the leprosy village into the wider  community.  It was particularly good to see how the school children were completely integrated, mixing freely with each other and even enjoying Pat O’Brien’s magic tricks.  The last photo shows a leprosy sufferer in the Farafangana village which was built and supported by TASC Madagascar. 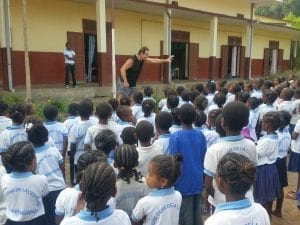 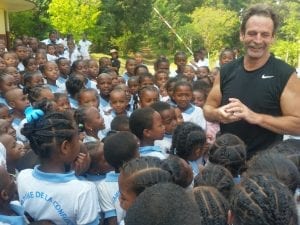 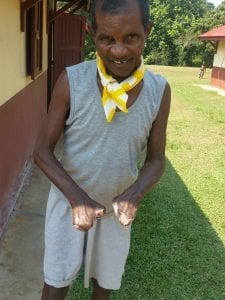